last year I put out an album with Feral that got great reviews and named to some Best of Year lists, went on a micro-tour with the amazing Carolyn Mark and pals, played a show for The Secret Emchy Society that was 3 seats shy of sold out, traveled to music festivals in London, DC, and New Orleans, spent a bunch more time in Santa Monica falling in love with the ocean, started a food and booze blog [booze-and-bones.tumblr.com], started personal training / boxing again, made crazy music and collaboration plans for the new year, got an amazing new puppy, and worked my way through a lot of intense grief, depression, interpersonal conflict, crisis of faith, and honest awe at how the world works and comes together. I don't know what this year holds yet. But my only resolution is to be open to it being freaking awesome. To looking for the opportunities and grabbing them whole heartedly. To embracing all of the yay that is waiting. And for the crappy parts? Learning to learn from them. Also this is a bit of a call to arms. If you want to work with me, collaborate, write, text, chat, create stronger friend and art bonds to start making our own revolutions... just say the word. My intention this year is to say yes as much as, and however I can.

the beauty of childhood is the freedom to change your mind without doubting yourself. 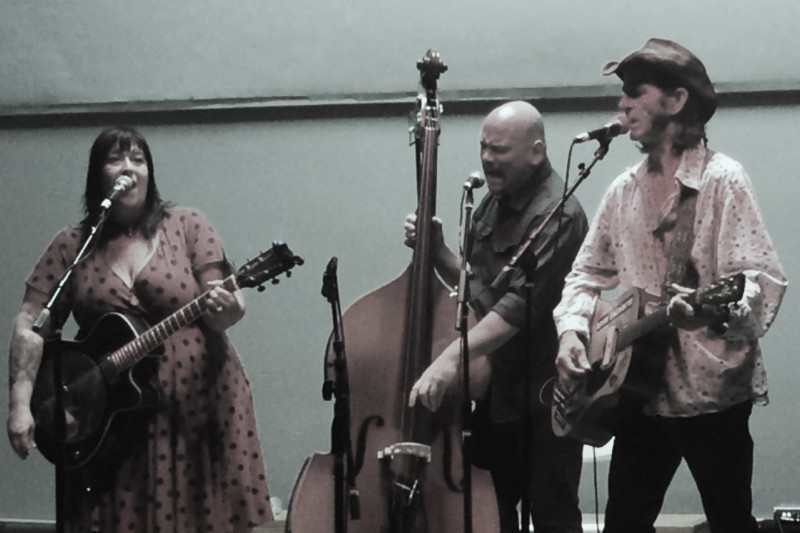 I was realizing the other day that i haven’t made a real and actual personal text post here in a while. and i think back to the days of livejournal and how the interface of a site can really change how you interact with it and what sort of content you make. ugh and that last sentence just made me hate myself a little for how techbro it sounded. but in all truth, as I’ve moved in my life further from writing and poetry and literature and more towards music, I miss the introspective 1500 word pieces I would write about the light hitting the leaves while I drank my coffee. self indulgent sure but they were a moment of peace and beauty in what is often a violent and chaotic world.

it’s always fascinating when people start to move away from being acquaintances and into being more true friends. the other night i left too many things over at a friends house when leaving at 2am because I was exhausted. texting him a few days later to ask if yet another thing was there (my necklace) he said that he had found my rings but I was wearing the necklace when I left. and I was so touched. because I’m not used to being seen. not in a long time. and that he had noticed and remembered that I was wearing my necklace, it might seem like such a small thing, but being seen like that made me feel taken care of, appreciated, like I mattered. and it was… it felt like old times in the best way. and i guess that’s part of it. finding new friends that feel like old times so that your ancient souls can reconnect in the now for new adventures to become memories. sometimes time is just a joke being played on all of us I think. more of a figure eight than a circle. giving us the illusion of always being new and moving forward but really just moving and intersecting with its own future and past now and then.

K brought me lilacs at work last week. deep purple and smelling of sunshine and that big yard where you could roll around in the fresh grass, pick wild rhubarb and eat it under the willow tree without a care in the world. sometimes I think my whole life is just trying to get back to those moments. but as time is the trickster, even if I went back to that same house, and that same yard… it would never be the same.

i live in the strangest place of analog and digital in my life these days. dayjob and band job times spent on the computer 8 or more hours a day. tied into my phone gadget. responding in 2 mins or less to fire drills and emergencies that matter for a bottom line but not for the world at large. and then I disconnect and go record music to tape with microphones that are 50 years old on guitars that haven’t changed in a century or more. singing words and learning chords from men that work with their hands and none of us care for a moment that we are anything but real and alive in the moment. it’s fire and life and sweat and music and nothing else matters.

a heat wave is coming. the second in just a few weeks. i’ll need to keep some extra water on hand for the new plants i put in the ground last week. this morning it’s 7am and already in the mid 70s. Oakland doesn’t have the crazy ocean wind that keeps San Francisco cooler on these days. I dream of lunch breaks at the lake and swimming for hours with nary an email in sight. i want to be sunburnt and tired from play and picnics.

on Saturday night after the Vagabondage show I went to the Cloyne Co Op farewell party for alumni. Technically I was a crasher - just like I had been when I hung out there and partied with my friends all of the time. 30 - 50 old punks and rabble rousers hung out with the current students trying to give the place a good send off before all the current kids are evicted to make the place a substance free academic housing sort of thing. I wandered the halls drunkenly and lost just like I did 20 years ago. Looked at the 30ft palm trees my friend had planted when they were tiny baby palms, and hugged so many old timers while meeting new amazing folks young and old and soaked in the feeling of being the right age to remember being in my 20s and to appreciate being older and knowing how to have fun smarter now. i kept having a small court of male students asking me about music and fire. why do my topics always go back to that? it was flattering in a hilarious way. my ego was happy and my boundaries were solid.

the air is already losing it’s morning salt smell of the bay and turning dusty. time for more coffee and a few more moments to dream.

Today started with rainy highways and New Orleans jazz, driving the vanpool into work all clicked in to WWOZ internet radio and while my fellow riders half slept and zombied out to cell phone updates and email checking I imagined I was driving through a lush and heady humid storm heading down the 10 towards my city. Arriving in Sunnyvale instead wasn't the most pleasant surprise, but the ride getting there felt at least a little magical.

I'm torn up and tired from last nights show up in Glen Ellen. Vagabondage played the Jack London Museum / House of Happy Walls up at Jack London State park. It was a fancy affair with beer provided by Lagunitas, tickets were $20, the Sonoma papers gave us a good amount of press, and we shredded ourselves to lovely moody raucous musical bits for over 90 minutes of passion. Completely acoustic and thus my throat is hamburger today. But oh those moments. One guy was so moved he bought a CD with plans to play it at his fathers wake. Another woman bought one saying it reminded her of all the good and hard parts of being in love.  I was just moved, surrounded by so many old trees, moss, stone, and wood. Transported. And that's the best part of making music.

The day before Rhubarb Whiskey did a couple hours of interview and music on Lilycat's radio show. Oh that Sizzle makes me laugh. It is always interesting too to hear your music in other people's context. How they react, what they see. We shared a few trade secrets of our recording process, and got into a nice healthy argument about the use of strawberries in rhubarb pie. Oh I love my strange little quirks about food. Why do I care so much. and yet... there I am again arguing against the cloying sweet.

When I got home, or actually, on the way home from the radio show, while my eye began its allergic reaction and started swelling shut, I started getting inspired and full of the ideas. Phone recordings of four new songs happened while stuck in traffic and getting home and running to the music cave meant another song was born and constructed and I'm kind of in love with it. The other four, I'm hoping to dive into them tonight.

Oh there are so many more things to say. There always are. Meanwhile - here's a little pic of me that John Flaw took just before our show last night in the park. 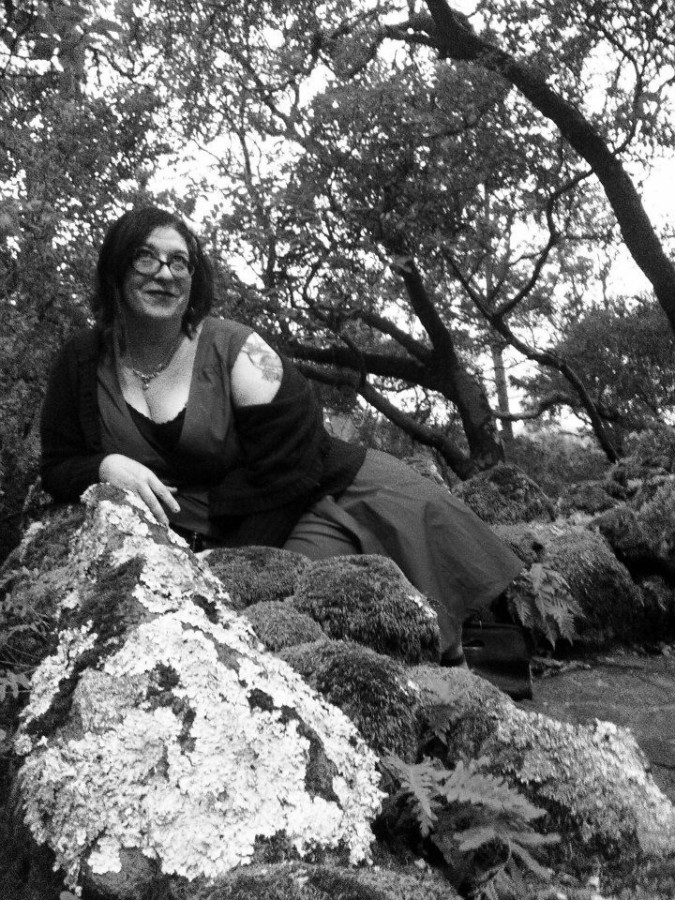 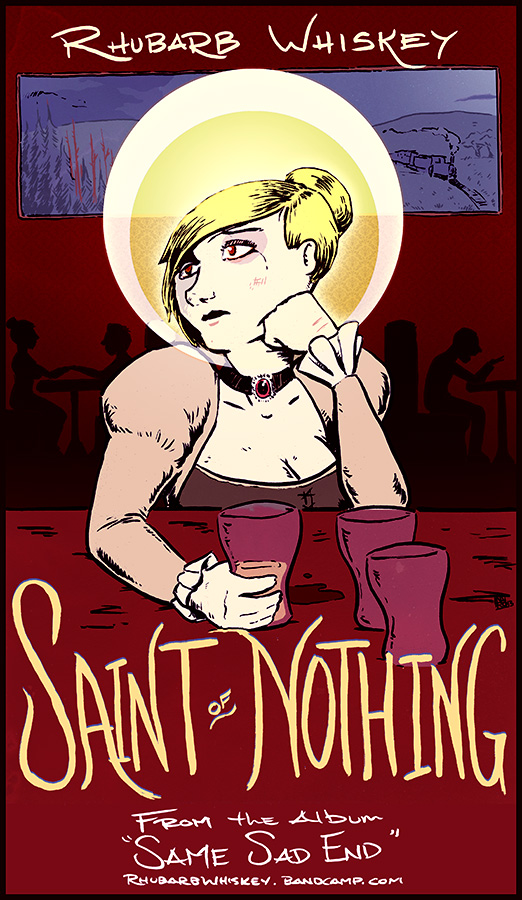 Once I wrote an anti-love song that broke my heart wide open. This is that song.

Saint of Nothing by Rhubarb Whiskey. 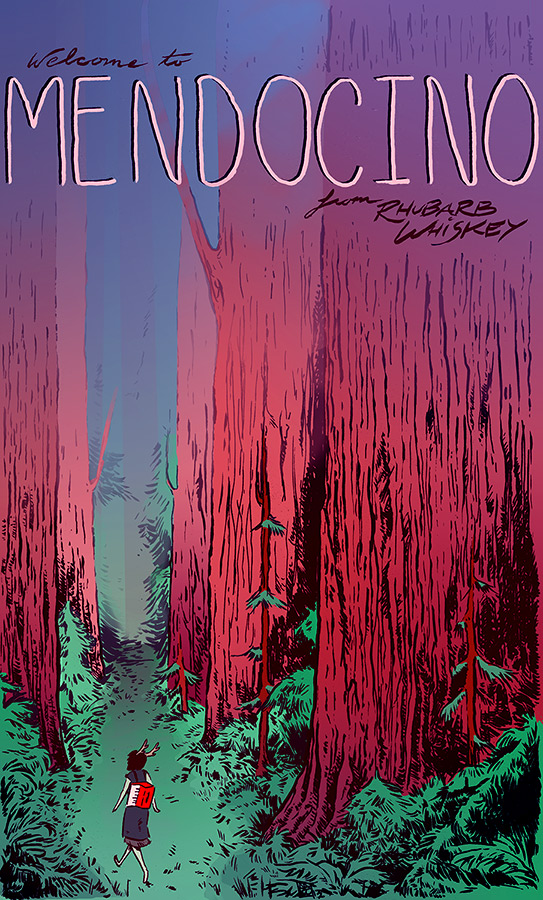 So the new Rhubarb Whiskey album came out on Weds. I have a lot of things to say about it but mostly just stunned and somewhat overwhelmed (in a good way) at the public reaction to it. It's easy to just get stuck in your own head about something when you've been working on it mostly in a vacuum for a couple of years.

So far we've been likened to Nick Cave, a Bluegrass Dresden Dolls, and this (which I love) "Hellbilly heartrock ferocious folkpunk anarchistic Ameridrunkania"

But I want to share what a fan wrote today on tumblr. It's like he read my unconscious deep in the soul gut desires of what the album would be and then shared it online:

from : http://gentlemanwolfypunk.tumblr.com/post/41455293857/same-sad-end
"Okay, I know I have been posting a lot about Rhubarb Whiskey and their new album, “Same Sad End”, but please hear me out:
Click on this link. Just listen to the album.

This is by far one of the best albums I’ve heard in a very long time. Rhubarb Whiskey has always intrigued me for their dirty, bluegrass feel and their tightness in how they play, and this album continues the trend. Emchy’s voice is somehow smokey and smooth at the same time; so full of soul and touching in a way that makes it feel like she’s singing just for you. To her, Sazerac’s vocals are the perfect counterpoint, rough, gritty, and almost Waits-like at times, all of which is punctuated by the skillfully played mandolin, banjo, guitar, bass, and piano that you’d expect from the best of junkyard ensembles.

Come to think of it, there are a number of beautiful Tom Waits like moments on this album, which may be one of the reasons I love it so much. Emchy’s writing dances on the line of bluegrass and folk punk, weaving between energetic reels, sultry and dirty murder ballads, and syncopated visceral talking blues pieces… It’s impossible to get bored listening to this.

I know I’m not doing justice to how awesome this album is. Please, if you like folk, bluegrass, folk punk, Tom Waits, Soda and his Million Piece Band, or anything of the like, do yourself a favor and just listen.

so if you feel like taking a listen to what has occupied a good bit of my heart and soul for the last couple of years... have a listen rhubarbwhiskey.bandcamp.com 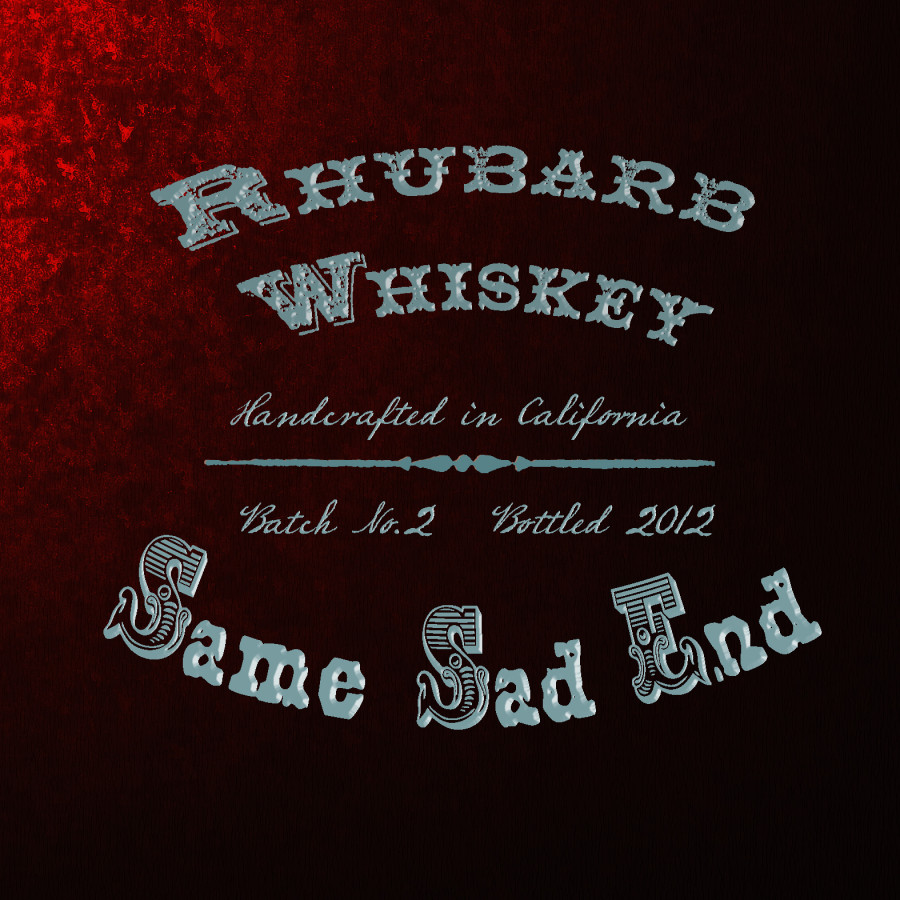 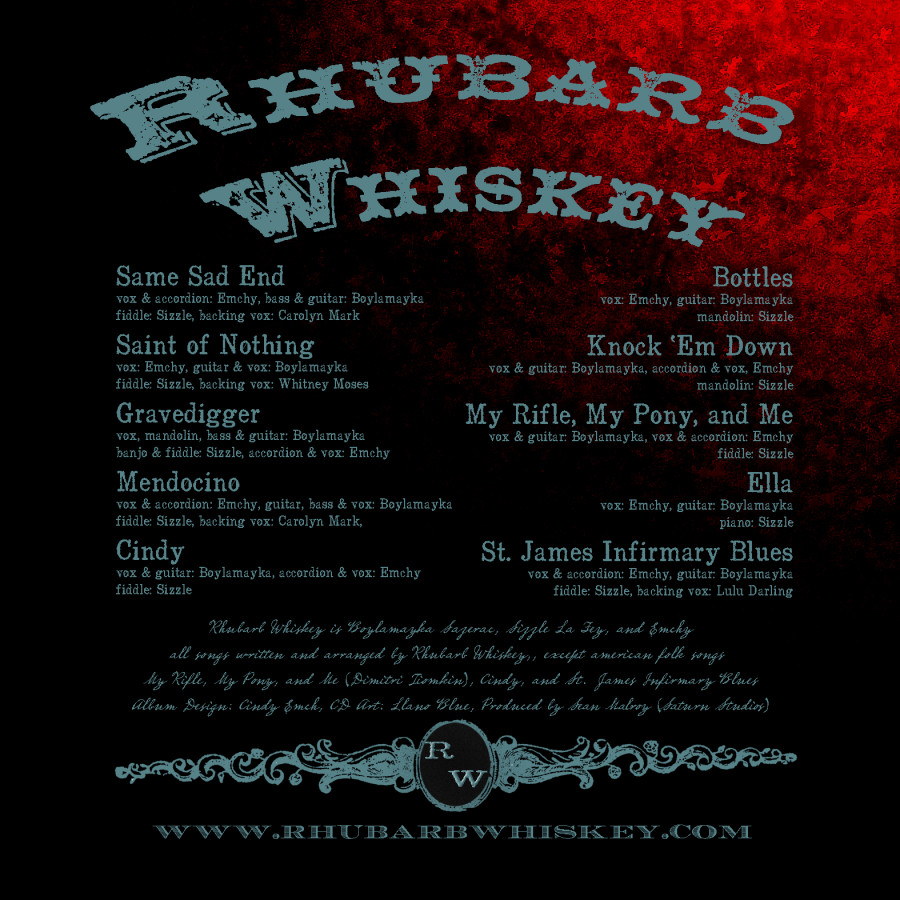